The Aces might boast an average age of 20, but the Utah-formed four-piece have spent the last 11 years honing their deliriously hook-heavy pop-rock. We sat down singer Cristal, bassist McKenna, drummer Alisa and guitarist Katie to discuss the beginnings of the band and to hear their plans for world domination in 2018. 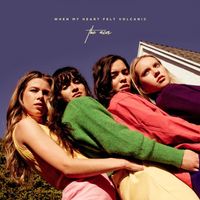 Can you tell us how the band came together?

Cristal Ramirez: We all grew up together, in a suburb of Utah called Orem. Obviously me and Alisa were born in the same house, and it was a pretty musical household in general. We listened to a lot of Earth, Wind and Fire, and Whitney Houston and Michael Jackson, and our older brother was in a bunch of punk bands, so we started messing around with music, taking piano lessons.

Alisa Ramirez: Orem is a pretty religious town, so parents often push their kids to play piano for church. But I never liked playing piano; I was like, “I wanna play drums.”

CR: Yeah, and I took an interest in songwriting and singing at a pretty young age and so we started playing together. McKenna’s mom was a school teacher...

McKenna Petty: Yeah, she taught Alisa in first grade. We all went to the same elementary school but we became really good friends in fifth grade. We were just hanging out all the time, and they had their instruments. And I grew up in a pretty musical family, but [Cristal and Alisa] encouraged me to ask for a bass for Christmas so we could start a band.

CR: For some reason we just wanted to be in a band. There were a couple of TV shows of boy bands that we loved, and we wanted to be the girl version.

AR: Yeah, I was, like, eight years old, so it was the Jonas Brothers and The Naked Brothers Band.

CR: But us three started playing together when we were 10 and eight, and started gigging pretty immediately, little local shows, with some original material and then a lot of covers.

What was the first song you wrote together?

CR: “Be Mine” was one. They were these romantic songs, like, what were we even talking about?!

Success is always surreal – and it’s always so humbling – but we’ve been dreaming big forever.

And how did Katie become involved?

CR: We’d been together for about two or three years and then Kenna and I went to different schools, and Kenna met Katie, and we were 13 or 14.

Katie Henderson: Yeah, in Junior High. I played guitar from when I was seven and my older brothers were in bands, so I was just playing with them and my friends all the time. But, yeah, I met these guys and we just became really good friends first.

CR: We just really grew up together. Us three are 21, and Alisa’s 19, so we have played together now for 11 years.

MP: It’s actually really good. A lot of really big bands have come out of Utah, like Neon Trees and Imagine Dragons. Utah is a very conservative, religious place and it was really beneficial for us because we were able to play the big venues at 13, 14 years old that 30-year-old guy bands were playing. Because there’s no alcohol venues are all ages. It’s been super awesome for us to have this platform to play so many live shows while we were so young.

CR: We have played so many shows – like, 100s and 100s of shows – so that we’ve already worked through a lot of kinks and gone through a lot of phases as a band while we’re still young. I think we feel really lucky to grow up in that city because it was super, super influential for us as a band.

What can audiences expect from your live shows?

CR: A lot of dancing.

AR: We love to have a lot of energy onstage.

CR: I think it’s very much a rock show, with loads of guitar. And the show’s very dynamic as far as songs.

How do your musical tastes intersect with your music?

AR: We were all raised on different things – me and Cris on 80s pop – and Kate and Kenna on new-wave and classic rock like Led Zeppelin and The Beatles, but I think now that we’re older it’s even more different. Like, I love hip hop.

CR: I definitely think our music has a pop sensibility to it, but it’s layered in guitars and funk basslines. We all have different influences that come through in our music but I think it’s our own thing.

AR: Especially the way Cristal and I do melodies. It’s very much influenced on what we were raised on, like 80s pop top lines, and then I think you definitely can hear 80s new wave.

So tell us more about your first EP.

CR: I Don’t Like Being Honest is a collection of moments of extreme honesty. I think it’s definitely situations that we feel most people have been in, or could relate to.

AR: I think we liked making the title a little ironic, because it’s really hard to be fully honest with yourself, and that’s what these songs are about, like, extreme moments of honesty. I need to be real with myself, whether I’m stuck in a relationship that’s not doing anything for me or I’m involved in a situation that’s purely physical. So I think you’ll get the groovy, new-wave-y, pop-y 80s vibe to the sound as well as some confidence out of “Baby Who”.

Can you tell us about your debut album?

CR: So we’ve mostly recorded it in Brooklyn and Los Angeles.

KH: A lot of different studios. It would depend on who the song was written with and who we ended up tracking it with. It was fun that way. We got to see a lot of really amazing studios, absorb a lot of history.

Who have you been writing with?

AR: Greg Wells scored a track on this record, Butch Walker did, and they’re big American producers who’ve done a work with Katy Perry and Adele. But half of the record is with our really good friends Dan [Gibson] and Simon [Oscroft] who are from New Zealand, and that’s who we birthed our sound with and did our first EP with.

Considering you’ve been playing together for 11 years, you must have deliberately taken your time with this debut?

CR: Definitely. It was never a rush because we didn’t want to do anything that went against our gut feeling, like, “This isn’t quite right, but we want to put music out.”

KH: There were times where plans and dates fell through, but we just trusted the process and that was a huge thing. Whatever’s supposed to happen will happen: it comes in its own time.

AR: It’s also the writing process. I think me and Cristal really pushed it to the last minute. I think ‘Last One’, the first song we wrote for this album, we wrote when I was 15 and Cris was 17, and then there’s a song from two months ago. During that entire time, we’ve been doing so many sessions.

CR: We just really wanted to make sure it was our best work and that we had written extensively to the point that we could pick from an array of songs.

What have you learned in the making of the album?

CR: I think we’re learning our limits, and what works best for us. Because music and art is personal and it’s individual.

KH: We worked best with our little team in Brooklyn: that’s how we found our sound, and they had never really done producing before. So it’s about finding your crowd and trusting your gut.

MP: I think we’ve gotten better at our instruments and really pushed to the next level.

CR: And we’re really learning self-care as well, mentally recharging and stuff. And how to make this unity between us a well-oiled machine, where we can just go and go and go, but take the time that we need to recharge as well.

AR: I feel blessed – I know we all do – to have found this. Being a creator and learning to be collaborative teaches you to grow up so much and to ditch your ego, and to realise it’s not about you or any one moment. Always take care of each other first before anything else.

What’s the scale of your ambitions?

AR: Sky high. We want to sell out Wembley.

KH: We’ve always dreamed big. When we decided as a group that we were going to do this, we sat in my basement and wrote this list of short-term and long-term goals, and the long-term goals were massive, like sell out Madison Square Garden in New York. So sometimes people will ask, “Did you ever dream that you’d be here?” and we’re like, “Yeah we did!” Success is always surreal – and it’s always so humbling – but we’ve been dreaming big forever.

CR: We’ve been working hard. We’ve been a band for 11 years so there’s no limit to our ambitions. Even in terms of our shows: we, The Aces, want it to be an experience. A movement, almost.

AR: We want it to be everything. We want to create our own world.

MP: We want an Aces land, like a Disneyland. (Laughs)