Channelling the spirit of Harry Nilsson and Todd Rundgren, Tobias Jesso Jr.’s 70s-influenced piano ballads have already won him famous fans in Haim and Adele. We caught up with the Vancouver-born, L.A.-based singer-songwriter to discuss his hotly-anticipated debut, Goon. 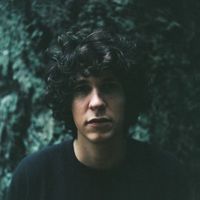 Hey Tobias, where are you today?

I’m in LA, but it’s foggy and cloudy.

What’s up with that?

I know, right?! That’s not what they sold me in all the pop culture ads.

I just wanted to keep writing because – for the first time – I felt like I was doing something good.

So, let’s start at the beginning – what’s your earliest musical memory?

Are you from a musical family?

No, not at all. Everyone is tone deaf in my family, including me.

How did you get into songwriting, then?

I don’t know. I think I probably got into it just to impress a girl or something; I picked up a guitar and said, “Look what I can do.” But I’ve always been a big fan of melody, and writing songs. You know when you’re browsing your interests as a kid, and you find out what you’re good at and what you’re terrible at? Well, I was not very good at math for instance, but songwriting, and just being able to follow melodies, I thought I was good at it. So I just kept going.

You were in a band called The Sessions?

I was, yeah. I was the latest addition. I came onboard to play bass – the easiest of all instruments in a band – and then I was in that band for a couple of years. Then I moved from Vancouver to Hollywood to play bass again – slacker – for a pop singer.

Which is obviously where the inspiration for the song "Hollywood" came from...

...Well, "Hollywood" was more of a loser’s take on time spent there. So yeah, it’s about the whole time there and how I ended up feeling after a few years of the deep grind.

Did that experience leave you disillusioned with the music industry?

No, not really disillusioned, because I wasn’t in touch with the music industry at all. I didn’t know which door to open to even see the music industry. It’s a strange thing because, as soon as that door did open, and JR took my demos and started showing people, it was like I knew everybody in the matter of a couple months. But, before that, it was a closed door. I was just showing my friends and artists my songs, but I had no ties to the music industry; I mean, I didn’t really know any producers. But it just blew wide open as soon as I started doing the piano thing, and I was like, “Oh, here it is! Right under my nose.”

You took up piano when you moved back to Vancouver, right? How much piano had you played before that?

I mean, I’d played "Chopsticks" and stuff, but I definitely wasn’t – and I’m still not – proficient at the piano. Instead of knowing a couple chords on guitar and being able to play the next chord, on the piano it was a lot harder; I had to really find out where I was. I was starting with one finger in the bass clef and then just three fingers; that’s all I could handle. You find yourself teaching your brain the hand-eye coordination for chords, and then I just started practising that way.

It’s funny, because if you listen to the demos in order, they grow in difficulty. There will be 10 songs with me playing one bass note and three chords, and then all of a sudden in the 11th song you hear an octave in the bass and I’m just like, “Oh yeah baby, next step.” I only ever took one lesson, and that was two weeks ago.

Did you always intend to share these songs with other people?

I mean – to be real – it was at the back of my mind to share it. Obviously, I thought it was good enough, but in the moment I was thinking maybe it was something I would look back at in 10 years, or pull out on my anniversary with my future wife to be like, “Here is a mix CD,” or something. I wasn’t thinking much more than that, realistically. But I put them on YouTube and Facebook afterwards because I was like, “You know what, I’m really happy with these.”

How long did it take for people to bite once you uploaded "Just A Dream" to YouTube?

It was instant. I had a video of a song that I put up the year before that probably remained at 20 views the entire time – and it was probably my 20 views – but when I put up these demos, everyday it would be another 40 views. And then there would be a comment from somebody I didn’t know, saying, “Oh man, this is great,’ or something. Then people I hadn’t talked to in a while and musician friends started reaching out, and I gained a bit of confidence. So I just wanted to keep writing because – for the first time – I felt like I was doing something good..

The demos are pretty sparse in comparison to the versions that appear on Goon. Did you always intend to flesh them out eventually?

Not necessarily; they were just me being selfish in my room. But when I met JR and we started talking about the album, he pointed out the different routes I could go, rather than just being a piano man. He had a lot of good advice, and also he is a producer so he wanted to put his flavor on it, and I’m a big fan of his production. By the time I went [into the studio] the idea of being able to explore lots of things – without pigeonholing each song to just piano – was exciting and I wanted to see what he could do... And this is where you tell me he either nailed it or he sucked.

You’ve picked up a lot of comparisons to songwriters like Nilsson, Todd Rundgren and Emitt Rhodes. But they weren’t reference points at the time, right?

For the album recording, yeah they definitely were, but not for the writing of it. When I wrote "Just A Dream" and the next four tracks, I hadn’t heard Nilsson or Rundgren. But when JR came on board and I sent him my demos, he was reaching out to recommend [those artists]. The funny thing is, I didn’t even think they were all from the same era; I’m not that musically-cultured so I didn’t know what the 70s sound even was. But as soon as I heard them I was like, “Holy crap, these chords are amazing.”

I think, just like clothes, chords can go in and out of style, and I don’t think those Carole King-style changes were around in recent years that much. So when I play a seventh chord on "Just A Dream", people might have thought it was new but it really was just a resurfacing of something previously thought to be very cheesy. Who knows, maybe they’re coming back into style now, and I’m going to have to figure something else for the next album.

You explained the album title to the NME as being about “a hopeless dumb guy who can’t express love”. On the album you actually seem pretty good at articulating emotion so...

How dare you! (Laughs) I was trying to figure out really what the album title was about just the other day, and I think I just liked the word, especially because having an album called “Goon” is sort-of self deprecating. That way, people wouldn’t be like, “Oh here is some sad, sad boy with some serious album title who is taking all this very seriously.”

I wanted to show the difference between how people perceive me and how I am in real life, because I am generally a happy guy, and kind-of a goof. Having a romantic, sad, serious album called “Goon” was just a good way to express it.

Lyrically, are the songs autobiographical?

Oh yeah, they’re pretty much mostly autobiographical. I tried to play around with stories and stuff but I’m just not that creative. I can’t really think of too many situations that I personally haven’t been in to talk about. And when I talk about other people it takes me forever to write lyrics, whereas when I talk about myself it’s just easy.

Considering the personal subject matter, how uncomfortable is it performing them live?

Well, it’s uncomfortable to just get used to performing, period. I haven’t performed very much so I’m still getting used to my voice, and trying to make it do what I want it to do. I mean, I’m not crying on stage, head-over-heel with emotion because they are older songs for me now. It’s definitely more nerve-wracking trying to get it right in the live setting, but I’m going to get used to it hopefully.

We actually saw your first ever live show, at Pitchfork Paris...

How was it for you?

I don’t remember it, I blacked out. (Laughs) I was on autopilot or something.

So we can’t not ask you about Adele. She broke her Twitter silence to recommend your track, right?

You’re a big fan aren’t you?

Are you kidding? I’m the biggest fan. She’s like one of my favorite of all time.

So have you been in touch with her since?

I haven’t, no, but I definitely have bragged about that tweet.

Have you noticed a lot more attention because of it?

I’ve given myself a lot more attention because of it... (Laughs) No, nothing much has changed; I didn’t walk outside of my house and there’s 50 Adele fans or anything like that. It was just a personal thing; it made me feel really warm and fuzzy.

So could we expect a collaboration in the future?

Would I be up for it? Yeah, of course I would! I mean I don’t think there is a single person in the entire music world who would not be up for a collaboration with Adele.

Finally, what would you like listeners to take away from Goon?

Whatever they want, really. If they can attach themselves to it emotionally for three minutes – or whatever the song length is – and have their experiences be brought out in it or feel sad or happy or anything at all, that’s great. The goal for the songwriter is just to have other people that you don’t know relating to your music. I’d just like listeners to feel deeply about something I’m singing.