Following a string of superb electro-pop singles, Denmark’s Karen Marie Ørsted has just unveiled an equally wonderful full-length debut. Here she explains the creative process on No Mythologies To Follow, how she ended up collaborating with Diplo, and why Sonic Youth and the Spice Girls have made her the artist she is today. 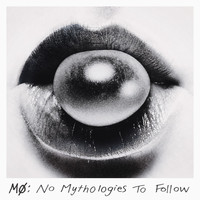 Hey Karen, how are you feeling about the album release?

I’m very, very, very nervous. But also I can’t sleep because I’m so excited about it! It’s a combination of feelings…

For the benefit of people who haven’t heard No Mythologies To Follow yet, can you explain what they can expect, please?

I would say it’s a mix of electronic indie-pop, with vibes from soul and hip hop. Thematically, the album’s very much about being young and confused and lost in modern society, and tired of the media telling you how to live your life. The message is that you have to find your own path through this crazy society.

I think that the album shows the two big sides of me; the one that is very vulnerable, but then the other side that is… not aggressive, but energetic and a bit “f*ck the world.”

If you want to achieve your dreams, you’ve got to make an effort.

As you say, it’s a really diverse album, sonically. Is that just a reflection of your own personal tastes?

Yeah, I guess so. It’s not something I thought about when me and my producer Ronnie [Vindahl] started making the album; we were just following our hearts.

When I was a little girl I was the biggest pop fanatic in the world, and when I became a teenager I was totally into punk and grunge, particularly Sonic Youth, who are still band I love most in all of the world. But then when I turned 20 I fell in love with hip hop, so I guess the album does incorporate all of these influences. I mean, I don’t think that my album sounds Sonic Youth at all but they’re a big inspiration lyrically.

When did you first start writing your own music?

What kind of music did you grow up listening to?

Well, before I got my first record – when I was seven or something - I was just listening to my dad’s music, and I remember him playing Sam Cooke. But the artist I remember making the biggest impression on me was the Spice Girls. That was my first record and that was the first time that I heard music that was really appealing to me, you know? Being a little girl, the Spice Girls were just wonderful, and a positive influence, I think, because they had all this girl power.

That’s one of the things that we love about seeing you play live; you’re such a strong presence on stage, it’s empowering to watch. Is being a good role model important to you?

I’m very happy you say that because everything I do music-wise is focused on trying to be myself, and being true to the things that mean something to me. So if I could be a role model for someone by doing that, that would be wonderful. But you know it’s a big responsibility...

Let’s go back to the creative process. You mentioned you write with Ronnie Vindahl; how does that work?

We actually work a lot on our own. I write the songs on the piano and record all the vocals in my own vocal box – at my parent’s house, in my old childhood bedroom – and then I send then all the vocals to Ronnie, who then produces around the melody. Sometimes he rearranges the melody and we hook up and finish the song together, but we always talk back and forth.

Do you have a favorite track on the album?

I have a personal relationship with all of the tracks, so it changes. But today it’s “Fire Rides”. It’s the opener on the album and I think it defines this feeling of being lost and confused in the big city, and being young and restless. You want to go somewhere else, but no matter where you go, you have this feeling of not knowing.

It actually happened as the result of an interview I did with DIY Magazine. They asked me about my dream collaboration and I said Major Lazer, so this guy on Twitter was tweeting Diplo saying “Please make this happen!” Diplo wrote him back saying, “We love her,” and my manager and I were just like “AHHHH!” So we hooked up in Amsterdam and had a small recording session.

They always say you should never meet your heroes. How did he live up to your expectations?

Well, in this case that wasn’t true! It seems like, to him, it’s all about making new, exciting music all the time, with up-and-coming and established artists from all over the world. He’s really inspiring and I adore his way of working, very much.

The industry is changing all the time, and people are in as soon as they’re out, so it’s so important to be open-minded and work with new and established people. You should just constantly be working on creating great music, you know?

Ok, so if he was number one on the list, who would be next?

I think that would be Blood Orange. I have a long list of producers that I think are wonderful but I really think he’s great. To be totally truthful, I’ve not had time to sit down and enjoy his new album yet, but I hear it’s great and I totally believe that.

It’s not surprising you’ve not had time; you seem to be constantly touring.

Yeah, we’ve been so busy. But it’s weird because you get used to it, and then when you’re home you’re like, “Argh, when will I leave again?” It becomes your lifestyle to be busy all the time.

Would you describe yourself as ambitious?

Well, yeah, I guess I would. At least, I’ve always been a dreamer and I think I learned from a very early age that if you don’t work hard to pursue your dream then nothing will happen. I know it sounds like a typical cliché but if you want to achieve your dreams, you’ve got to make an effort.

What are you driving towards?

Actually, you were talking about being a role model before, and I think one of my biggest dreams is to be able to be a good example and make music that will touch people in a deep way.

All the greatest experiences I’ve ever had with music have been when a song has really touched something within me, and made me want to do something about my life, or create something. If I could do that to someone else, that would be my biggest achievement ever.